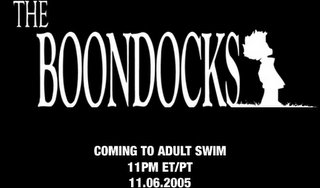 I have a ritual nearly every morning. Every morning I wake up and open my browser to the Boondocks comic. I love this comic. I even buy the books that he puts out on this comic. I have waited for years, literally, to experience the Boondocks Cartoon. Now that I’ve watched the cartoon twice, I have really mixed feelings. One possible reason is that I am a Boondocksphile (made that one up). I read the comic day in and day out, read interviews by McGruder, and all but have tattooed Huey on my arm (aight, I’m really not THAT into the comic but you know what I mean). So when I finally heard Cartoon Network picked up the show, I patiently waited. Maybe I’m too close to it to appreciate artistic variation. I think the cartoon is funny, not as funny as it could be, but definitely enjoyable. Most of the laughs come in a “comic strip” form (short jokes or running gags)which is true to the comic. The one thing that has concerned me and many who watched and are discussing the show is the use of “the n-word.”

McGruder decided to use it because its part of Black culture and he himself sometimes uses it. I was kind of dismayed the first week, but now I feel like I understand. No, I don’t think that “the n-word” (gotta put in quotes because now apparently it is a phrase)is appropriate or that he’s doing it from an empowering standpoint. I think he’s doing it to really piss people off. Who you ask? Everyone!

It seems McGruder has taken a different route with the show than he did with the comic strip. I think that the n-word is so over used in the show that most people who watch it, those who are pro and anti-n-word, would feel unsettled by it and question its role. I figure Aaron is SO smart, that he is taking a uniquely critical approach. He’s challenging progressives to grapple with its presence in our speech, while also challenging folks who do use it to question it’s frequency and utility.

Here’s another possible theory and possibly further evidence that Aaron McGruder is being critical in an avant-guard way. Ceasar is absent. Ceaser is normally the dude that balances Huey, he’s not gonna show up for the whole year. Instead, McGruder has Uncle Ruckus in every episode (thus far). Unless you really stalk the Boondocks, you were like, who is that crazy looking dude, but he has appeared in the comic before. In the comic, he is just as loathing of Black folks and ridiculous, just less ever-present. Ruckus shows us a part of the Black community that is self-hating. Ruckus’ off the wall antics are a heavy satire, but would get any viewer who knows a Ruckus or is a Ruckus to think twice about their commentary on Black folks and their commentaries on White folks.

Aight, this post was supposed to be really short, but I kinda feel like I may be “on to something” with the Boondocks cartoon. I guess time will be the test.