Ballot or the Bullet?

Well, it looks like Proposal 2 passed in the state of Michigan last night 58% to 42%. The passing of Proposal 2 does not surprise me, but it does disappoint me tremendously. Over the past few years I’ve seen leaders emerge from the U of M community and beyond to fight this measure. While it passed, I want to take this time to thank everyone who put their time, heart, and souls into stopping this thing. To you all I remind you, that your work will never be cancelled or distilled by this measure. You have served to heighten awareness among the unaware and provide fertile ground for the future battles that we will fight as we work to maintain civil and human rights.

While the nations applauds the Dems taking the House and the nation awaits very
tight senate races, I’ll be in mourning. It’s naive to think all the “allies” that we found in the fight against Prop 2 will be around today to comfort, walk with, and get ready for next steps, they’ll be busy returning to their jobs saddened, but not disappointed. For me the mourning is realizing that the very reason that I am able to attend U of M is under attack again. As a first generation college student and graduate of African-American descent, I was able to take advantage of programs such as the Rackham Merit Fellowship and the resources on campus targeted to people like me, who didn’t come from the best of circumstances, but when I look back down the pipeline, there will be fewer “me’s” coming in the door. Michigan voters have neatly shut the door behind them and many will continue on today with “business as usual.”

This year, like a number in the past, have continued to make me feel electoral politics failed me. The representation of “minority” issues in the electoral process rarely comes out in the minority group’s favor, no surprise right? But I realized that with Michigan’s battle of Proposal 2 that there is a silent tide that has been rising vis-a-vis the ballot proposal. While the highest courts in the land may rule in one way, the ballot proposal has become a tremendously dangerous tool to use local sentiment to contradict decisions by “activist judges.”

Last night I learned that abortion, English as the official language, gay marriage, and minimum wage were on the ballots of a number of states. Some of the bedrocks of American freedom and opportunities lay at the hands of a populous, mind you a populous that just seemed to figure out a Republican run nation was not doing us too well- but I digress. Out of all these measures the one that I think gives me the most hope it’s the increase in minimum wages, but even that is not enough (pun intended). The willingness to raise the economic floor is simple, in fact common sense. The abortion ban just got defeated, 45% of voters voted for it and they say it didn’t pass because it had too few exceptions… scary! English as an official language … I can’t even start to go there on this one. The ban on same sex marriages further demonstrates that the American people believe in freedom, for some. 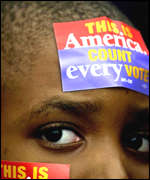 Collectively, these ballot initiatives literally mean the bullet for many civil and human rights, but they all happen relatively beneath the radar. In the past week, it would be hard to count how many folks from around the country didn’t know that Affirmative Action was on the ballot here. I would be lying if I said I knew all these key issues were on the ballots around the nation. The national silence around these issues makes it difficult to build coalitions and responses, but one by one these propositions and proposals are passing. Today it was Michigan, I hear Wisconsin you’re in the cross-hairs next. Until we learn how to turn out state level populations that are willing to vote against equality, we will be seeing this tide for years to come. Forget all the talk about “the tsunami” (by the way, does anyone else think its tremendously globally insensitive to refer to political shifts by the name of natural disasters that the world is still recovering from? I mean, what happened to good old landslides, at least we Americans know what that’s like) the state level initiatives are going to continue to creep in, be on the look out.

Finally, I’ve already got a number of inquiries about what I think the passing of Proposal 2 means. Well since the best comparison we have is California this is my quick take. The passing of Proposal 2, theoretically would mean the ushering in of a California-like system. While to some this may seem “alright” there are a couple of major differences between Michigan and California: 1) demographics- Cali’s racial demographics (majority minority -I know it’s an oxymoron) make it “easier” to talk about successes without Affirmative Action 2) economies- Michigan’s economy has been shrinking and will continue to, and 3) breadth of educational system- California’s UC system is way larger and more diverse than what Michigan has to offer.

To me, this means that you will fundamentally see a large drop in entering students of color, particularly Black because of the state’s composition. You will not see these students going to other schools four year institutions, I’d guess community college and other high cost urban schools will get flooded (in a best case scenario). You will see Michigan continue to be less competitive economically as the Black middle class flee to areas that consider their race in decision making. Lastly, you’ll see Universities in particular do their best to maintain the representation of marginalized groups, but with at best marginal success.

This may serve as a wake up call to some, but I kinda think if you’re not awake already, you may not be waking up. As the nation barrels ahead and waits for the “Democratic awakening” please remember that for many of us, the party politics will not save us and in some ways, I’m not sure the ballot will either.

For the folks who are in A2 and on U of M’s campus today there are two things going on of interest: 1) at noon Mary Sue Coleman, president of U of M, will address the student body about Proposal 2 and 2) the Multiethnic Student Affairs office is hosting an Election Recovery space at the Trotter house all day.