Black to the future? 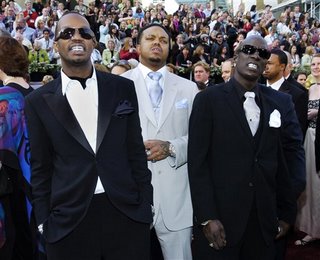 This post has been delayed for a minute, but here it is. Ever feel like we’re going backwards and forwards at the same time?

So the other night I spent my time flipping between the Oscars and Flavor of Love, which to many would eliminate my right to comment on the coming apocalypse ushered in by Three 6 Mafia winning an Oscar. But I don’t care, I gotta say it anyway. Three 6’s victory is ridiculous, the song was even lame. Now when Eminem won for ‘Lose Yourself’ I conceded the song was good and it was an important moment for Hip Hop history. But ‘Hard out here for a Pimp’ is garbage. The song didn’t even get real rotation in the Black community, the most I heard it was folks parodying it after the movie came out. It’s a laughable song. So I had the sinking suspicion that they would win an Oscar for the song and it would be a vast part of “the Man’s” plan to pedestalize our worst. My prediction for 2007, next year D4L wins for their rendition of “Flapjacks and Crack” from the soundtrack of “Doin’ Dirt in the Dirty.” My prediction for 2008, we’ll be back to pickin’ cotton.

Speaking of picking cotton, so I heard about George Clooney’s acceptance speech so I went to check it out for myself. So Clooney is proud that academy has been out of touch with rest of the world because it talked about Aids and gave Hattie McDaniel an Oscar? Are you serious? George, how out of touch where they when they made Hattie and her body guard sit in the back of the Ambassador Coconut theater? How out of touch were they when she had to deliver the speech in a separate room? If I had my copy of Toms, Coons,Mulattoes, Mammies & Bucks I would really get into it, but I can’t find it. You’re lucky George and the Academy, very lucky. (Why does this moment remind me of when dude in Bamboozled said, “You’re lucky I ain’t read Wretched of the Earth yet!”?)

And since I last posted we lost one of the great Hip Hop producers, Jay Dee aka J Dilla. Check out his work here. 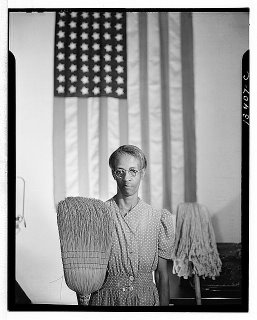 One of my favorite quotes from him is


My good friend, I’?ve got a 35-millimeter camera in my pocket. You’?ve got a 45.automatic in yours, but I feel my weapon is probably more powerful than yours.

Parks definitely shot with a camera (both still and video) the vast dimensions of Blackness, humaness, and life as a precious entity. He lived all the way to 93, which is certainly a full life RIP Mr. Parks.

And the third ancestor I want to recognize on this post is Fred Hampton Sr. of the Black Panter Party. I was recently put on to a story about the controversy that is happening in Chicago about naming a section W. Monroe Street (the very street on which he was killed) after him. Now of course, I don’t expect the people who killed Fred Hampton to want to name a street after him… but I think it’s amazing (at least in this story) how people’s biases are laid right on the table. Even if Fred Hampton Sr doesn’t get his street the struggle continues cause as Dead Prez said,

So now let me get to some more local issues. Today in the Daily I learned something that I have been avoiding for years. If you’ve been around Ann Arbor, you know the absolute cheapest place to buy Michigan gear is Steve and Barry’s. For years now I’ve been suspect of their bargain basement prices. I figured the only way these prices could be so low were sweat shops… unfortunately today I got partial confirmation. This letter to the editor exposed my silent consent, but I think since they formed a labor union, I can keep buying from them right? ;)

A couple of days ago Mara Gay published a nice piece on the Daily and its issues. She does a really good job of making distinctions between the people who are working to change the campus climate and the complainers. All too often folks conflate the two groups. My favorite part of the editorial is


Sorry to disappoint, but the Daily features no smoke-filled rooms where The Man puffs a cigar behind ornate mahogany doors and plots to destroy the black community.

Duh, we all know that! Of course not the doors are made out of masonite, everyone knows that. But on the real, she does attempt to take a deeper cut at the issues of the Daily, though her reasoning for the issues is a rehashing of the contact hypothesis of prejudice and her solution appears to go back to the increase the minority representation at the Daily. Is that really the only solution? Are we running low on creativity?

Last but not least, the Multi-Ethnic Student Affairs office has been putting up some good virtual resources such as an events calendar and the Pan-African Network. Be on the look out for more good stuff.

Alright, it’s about time I brought his post to a close. I would like to thank the contributions of Alma, Dance, Tone, y tu mama tambien. I wouldn’t have made this post happen without all of you…. oh yeah and Jesus. :P