Can you breathe? Reflections on Non-Indictments, Activism and Black Life 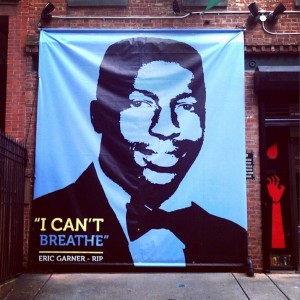 There isn’t enough ink to express our pain. Day after day, month after month, year after year, the pain of being Black in America globally is apparent. Moments ago I read the headlines and tweets that told me the NYPD officer  Dan Pantaleo (say his name until it can’t be forgotten, until he’s held responsible) the NYC cop that killed Eric Garner would not be indicted. A week and two days before that I heard news out of Ferguson, Missouri that Darren Wilson would not be indicted. That same day hours before, I watched my beautiful daughter be born into this world. Being Black is like that, valley, peak, valley—in that order.

No matter who it is, the time comes that you realize that being Black is hard and beautiful. You come to learn that your cool, your clothes, your rhythm is quested after like a golden fleece, and then you remember that you’re hated all the same for it. Hated for the thing you inherently possess and ultimately cannot dispossess—trust me, many are trying to give it up, but you can’t. Many are trying to recreate/generate it, but it has to be organic—we synthesize, it can’t be synthesized.

I recently got in an online disagreement with a family member. I gave up arguing online about 2 years ago and my life has been all the better for it, but this time suffering from sleep deprivation courtesy of our bundle of joy, I engaged. My cousin, one of closest loved ones on the planet, posted a status about shopping on Black Friday and tongue-in-cheek told folks to “say something” about her shopping. I was frustrated at her at life.

I remember when I first heard the calls to boycott Black Friday #notonedime, I knew that arm chair theoreticians and activists would sharpen their darts aiming at the hot air balloon of social activism. I knew it’d be a dog pile of, “How is that supposed to help?”, “We need new solutions!”, “What difference will it make?” –you know the standard chorus of consternation. I’d decided that for each post that someone put up like that I’d ignore it and write them off as disaffected, short-sighted haters (which they often are). But truthfully I understand them. I’ve been them. It’s kind of like being at a dance and not really knowing how to dance so rather than stepping out and risk being a fool, you talk about the DJ, you chit chat with your boys, you explain how you don’t like the newest fads … all the while the dance goes on, everyone else is sweating it out and having a good time, and you go home realizing you missed out, but never admitting it. It’s easy to be on the sidelines, it’s hard to put your shoes on the dance floor.

Moral and ethical courage are sometimes in short supply, but we have enough to move ahead, we never needed 100 percent to be on board, just a few committed ones. A few years ago an elder told me, “If everyone who claimed to have marched across that bridge [Edmund Pettus Bridge] was on that bridge the damn bridge would have fallen in!” They’ll come around later … or come around for the victory party. When Fidel Castro was asked about what he’d do differently regarding the Cuban Revolution he said he started with 82 men but he would have started with fewer men but ones who had absolute faith. That’s real rap!

Boycotting Black Friday or Cyber Monday may not be your cup of tea, but neither is the loss of Black life. I am in awe of the young people organizing out of Ferguson and the people who have poured into that community for the past 118 days. The boycotts on Friday or Monday were mass actions that allowed folks without much skin in the game to make a sacrifice, to symbolically and strategically show impact. It worked, no matter what mainstream media says. I’m still not really cool with my cousin for not participating, but she’s not alone. It just means we need to do more work to show folks why we matter, why boycotts matter, why protests matter, why Black lives matter.

We have too many servants and too few activists. Activism is sustained struggle. (Community) Service, often, is for a moment and done. Activism is not a visit to the soup kitchen; it’s not tutoring after school; it’s not collecting donors for a cancer run. Okay, it can be that, but that’s only a small part of it. Activism, in my estimation, has to do more than service the sick or un-well, it’s got to do the work of uprooting the things that injure and press to build a safe space for a thing to live and thrive. Too few of us have a heart for activism, because true activism means you give up something, not once, but daily. It’s a process of dying so others can live—it’s martyrdom, but without the fanfare.

The tweets, the appearances on news media, the op-eds will all die out soon enough, but our willingness to sacrifice and fight must not. We can’t accept a commitment to body cameras and tough language (not policies) around ending police misconduct. The legislation needs to change, I truly believe it does #changethenypd. But more than legislation our entire orientation to Black life must shift. And I mean the lives of Black men and women, all lives matter but our blood runs too freely for us not to demand special attention.

The police don’t love us, and they never did. My dad was a cop and even he knows this, but I’m not sure he’d admit it. No matter how many times you show me a teary eyed boy or a dancing cop, I can’t forget that those moments don’t compensate for the force that they use on our bodies and have been doing so for centuries. Du Bois was right. The police are a new articulation of slavery. He was right – It’s not about diagnosing the problem, the bigger and trickier task is to get people to care and then to act. You’ve read all this so I guess it’s wrong of me to ask, “do you still care?” but I have to ask these days.

It’s hard to continue to care. For many of us, by the time we heard the non-indictment of Garner come down we were numb. Some of us got numb when we saw loved ones beaten into within an inch of their lives by cops and realized that no one cared—not the grand jury, not internal affairs, not the mayor, not even the politician who promised to get tough on corruption. Some of us have been numbed by what we have access to—hey, who doesn’t want to get that 60 inch on deep discount? Some of us are numb because the cost of caring is reckoning with the vulnerability we all must come to grips with—you may have more degrees than a thermometer but your skin remains a target. We’ve got to care enough to fight.

We’ve got to fight the system. We’ve got to struggle with ourselves. Love ourselves enough to correct ourselves. Love each other enough to remind each other that we got this. That our ancestors have already showed us ways and walk with us now. We’ve got to love so that we can see a new day. When I look at my daughter in resting slumber I get haunted with visions of the reality that she will face. I get scared. I get angry. I fight that with ancestral love. I fight it with knowledge that if we wake up, nothing can put us to sleep. I fight because I love her. I love my nephews. I love my nieces. I love our elders.

Love wins not because we will have some “pie in the sky” kumbaya moment—we won’t, and if there is I ain’t showing up because I know it’d be a sham. Love wins because it stands up to injustice. It doesn’t ask for forgiveness for the person who is stomping on the vulnerable. Love kicks the ass of the person stomping, helps the vulnerable, and tells the one stomping to get help … or get more ass kicking. I don’t mean that literally, well maybe I do. It’s somewhere between what the Bible and George Jackson said. Love is patient …  Patience has its limits. Take it too far and it’s cowardice.

My ancestors want me to be patient, but not a coward. They want me to wake up, to wake my neighbors and to dream. Dream the other world. Build the other world. Fight this world that is trying to rob Black joy and Black life. Remind them Black is beautiful and if you don’t know you’re going to figure it out later, but we got a nation to build, a world to transform, a system to fuck reform overthrow eliminate. We’ve got to sacrifice what’s here to create what should be. I’m not waiting for a grand jury; I’m waiting for my cousin; I’m waiting for my comrades; I’m waiting for us to be sick and tired of being sick and tired. But don’t wait too long. Don’t be too tired.