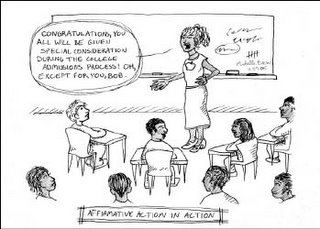 So of course I’m a huge fan of the Michigan Daily. Of course they publish really accurate and insightful pieces. Of course I’m lying. The cartoon to the right was published on Wednesday. Nice job Michelle Bean!

There is a nice letter to the editor by Lisa Bakale-Wise that breaks down why the cartoon is ridiculous and inaccurate. 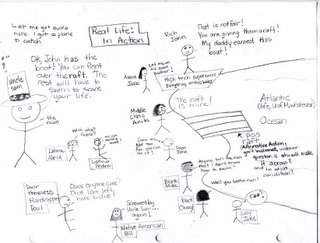 There is a cartoon to the editor response from Meisha Jihan Williams in Thursday’s paper. It’s pretty funny, I hope you all can see the image cause the Daily digital image was too pixelated to post.

Hey, where is that multicultural comission when you need them? Oh, here’s the answer… kinda.

Hampton University is really in the spotlight these days among progressive communities. I definitely do not think the students should be expelled, but I would not be suprised if they were. Its hard for many people, particularly those who did not attend HBCUs,to understand and deal with that fact most HBCUs have conservative administrations while their student bodies are generally progressive. And I do not mean conservative administrations in the sense that we usually talk about at U of M, trust me, ya’ll don’t know conservativism. I’ve always understood HBCUs conservativism as closely tied to their financial donations. Since HBCUs are so financially strapped they have little choice but to present themselves as traditional and attempt to keep their institutions running. It will be interesting to see how Hampton responds to pressure from progressive communities in the long run. Part of the advantage of the internet is quick communication, so many more people found out about this incident than other similar incidents that I heard about in the past. I’ll keep you posted.

Update: The seven students were not expelled, but 5 of them will do some form of community service.

Save Tookie! In a couple of days the Governator will hear the appeal for clemency in Stan “Tookie” Williams’ case. Tookie co-founded the Crips and is serving a life sentence with a death penalty. His prior appeals have failed, the most recent attempt at appeal based evidence issues was denied by the California Supreme Court. This appeal however is based on his work as anti-gang, anti-violence advocate. I think the case is important because it speaks to the idea of reform within prison and whether America is interested in seeing people reformed, I’m not too hopeful for the outcome.