Everything was made for White kids… 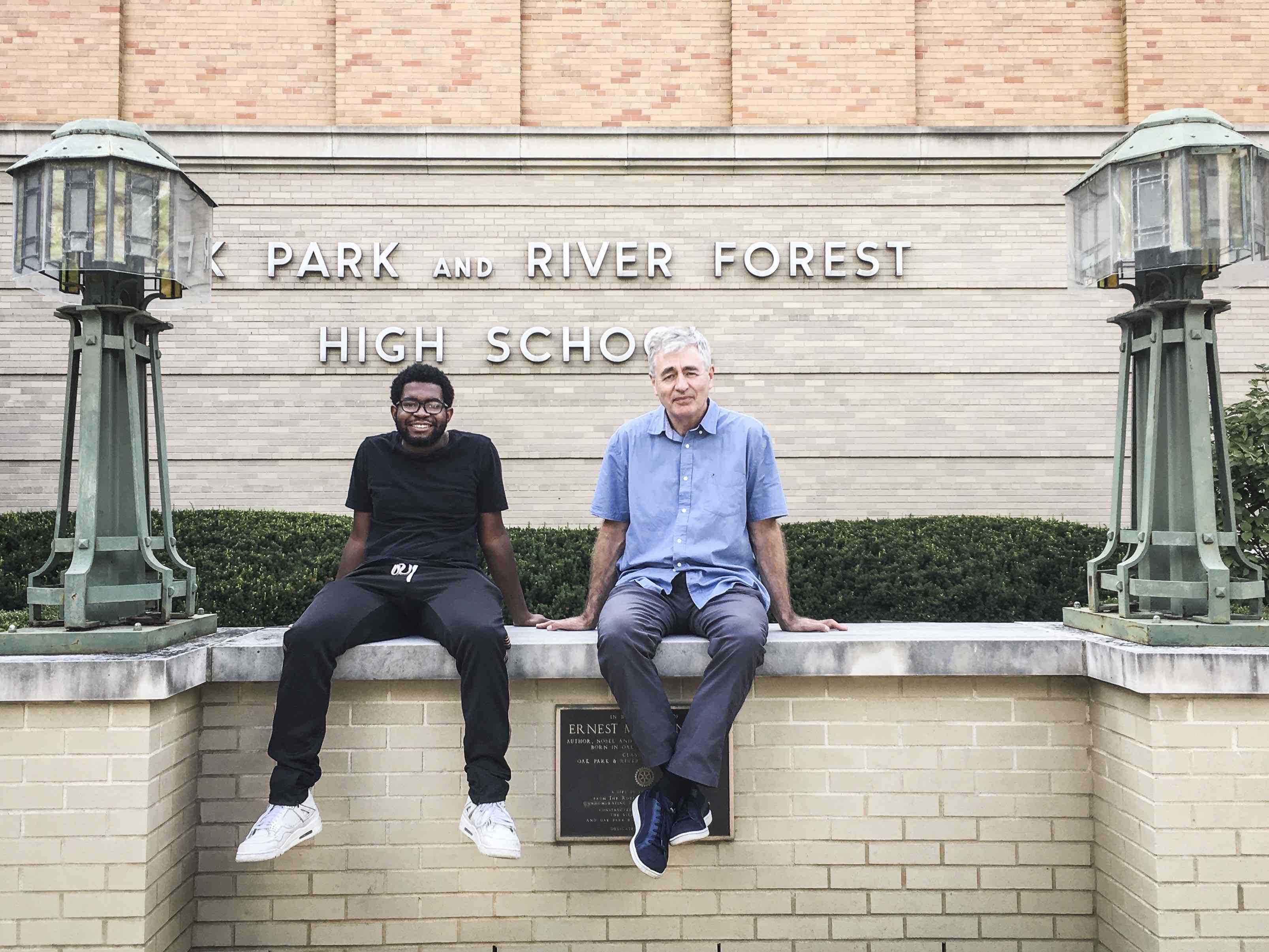 Good schools aren’t good for everybody. That is one of the things I learned quickly as I began to study schools that were widely celebrated for achievement and diversity, but there was much more beneath the surface. America to Me, a new documentary series directed by Steve James of Hoop Dreams fame, has begun airing on Starz after receiving critical acclaim at Sundance earlier this year. The 10 part series is just four episodes in, but from its opening it’s clear that the series goes beyond celebrating the school’s diversity and is attempting to grapple with race and racism. On this alone, I recommend the series but that doesn’t mean it’s without issues.

The series, so far, highlights the lives of several students at Oak Park and River Forest (OPRF) High School in suburban Illinois. In addition to the students and parents who are followed throughout a year, we hear from faculty, administrators, and school board members. The students are involved in an litany of activities: wrestling, spoken word, cheer, drill, as well as students who do no extracurriculars. There are students who are freshman, seniors, heterosexual, non-binary, biracial, and the list goes one. Despite all this diversity, the main students and families followed by the crew are all Black (or at least have one Black parent). For viewers, this is great for showing what its like to be Black, in its many iterations, in a school like OPRF. Oak Park, as its commonly called, is the kind of school that has great amenities, receives academic accolades, and whose optics look like they’re pulled from a college campus website. Still, the experience of Black students there is markedly different. For example, in 2015, 23% of the student body was Black, but 53% of students who got suspended were Black. For decades now, even in schools that are well-appointed, Black students have bore the brunt on unequal treatment. For Black folks, this is not an entirely new story, but that is also why Charles’ words that open this post are so important. Charles doesn’t start with the achievement gap or Black underperformance–we have no shortage of writing or documentaries on that, instead he highlights the pervasive culture of white advantage.

If there is one thing that is glaringly absent from America to Me it is the voices and experiences of White students and families who accrue the spoils of suburbia whether traversing town or selecting advanced placement courses.

If there is one thing that is glaringly absent from America to Me it is the voices and experiences of White students and families who accrue the spoils of suburbia whether traversing town or selecting advanced placement courses. In my own book, Inequality in the Promised Land, I found it essential to make sure the voices of White families were present for a few reasons. First, by speaking with white families, I heard their perspectives and experiences rather than simply inferring them from the accounts of others. Other scholars who studied suburbs, such as John Ogbu, only studied Black families, and attributed academic failure to Black children’s “academic disengagement” while assuming White families’ achievement was a result of hard-work and high functioning. In the social sciences, long traditions of deficit thinking limit us from seeing what’s actually happening. Second, once I put the voices of White and Black families in conversation the relational dynamic between the two became clearer. Black families were not simply disadvantaged, White families were hyper-advantaged and they routinely hoarded resources.

When it comes to suburban spaces, including the villages of Oak Park and River Forest, the history of racial exclusion is not simply in the past, it shapes where people live today and how people are received in public spaces like schools. The critics’ responses to America to Me have been favorable, but as I read comments on YouTube, IMDB and other sites, they are far more critical. Many of the comments argue that if there is an issue with Black academic success in the school it is rooted in Black children’s effort and their home environment. This old trope has long been challenged by research, but in remains a common explanation among popular audiences, even educators who are meant to help produce equitable learning environments.

The entrenched belief in Black dysfunction and normative White responses is captured in one telling moment in an interview in episode one.  Sami Koester, a student on the cheerleading team, confesses that Deanna Paloian (bka Coach D) the lead cheerleading coach who is white, is now different. “The Coach D that I used to know from when I was 12, she was a lot nicer. She did tell me that she has to put herself in authority more because all the girls are Black and she has to like put up her own fight to make sure that she gets what she wants.” Coach D argues she coaches the girls, who are predominantly black (the drill team in predominantly White), like a football coach and she is not afraid to hurt feelings or be bluntly honest. She peppers her speech with “girlfriends” as she wears a Beyonce themed shirt. Her approach is met with mixed reception from the Black girls under her guidance. Some suggest, “She yells at us like a mom” while others highlight Coach D’s approach may be rooted in her racial mismatch which heightens attitudes and sassiness. The filmmakers don’t make a effort to suggest which came first, adults’ attitudes or children’s responses, but it becomes clear that often the most “well intentioned” can create dangerous environments for Black children.

In episode four, viewers get a deeper look at Aaron Podolner, a White Physics teacher who was born and raised in Oak Park, and his approaches to race inside and outside of the classroom. He “invites” (I’m not sure how much choice they had to actually opt out) two Black students–Jada Bufford and Charles Donalson to read his memoir on race and comment on how he’s handled race in the classroom. In the classroom, Jada challenges Podolner to respect the boundaries of students and mentions how when she asked him not to comment or make jokes about her hair, he persisted. She points out that in his attempt to “relate” he is missing the very students he claims to care about. Podolner misses her point entirely and tone deathly centers himself and his difficulties as he responds,

“I think it’s hardest because we get a lot of pressure here, as teachers, to, like, make a difference, to fix black people, to improve scores. We’re not given any ways to do it. So that’s like, someone like you [motions to Jada and Charles] could be a great resource to us teachers.”

I was literally forced to rewind the show to make sure I heard correctly that Podolner matter of factly invoked the idea that Black children are broken. This is not an uncommon belief among educators, though not often stated. Despite equity commissions and task forces, Black deficit thinking still pervades and governs large parts OPRF. Du Bois famously asked, “How does it feel to be a problem?” and more than 100 years later Black students in OPRF and settings like it could give long monologues on its pains.

In another scene, Podolner sits down with a Jessica Stovall, a Black-White biracial English teacher, as they work to form a teachers equity group to address racial inequality at OPRF. Stovall astutely challenges Poldner, “I understand you’re so passionate about helping your Black students. I know that about you. But I do notice when I start to push you on talking about the miseducation of our White students then you’re less likely to want to engage in those types of conversations.” Podolner describes how he wants to demonstrate to Black and White kids that he “knows more than the average white guy” about Black culture, which he thinks will disturb the classroom dynamics of whiteness and white supremacy. Like many well-intentioned White educators I’ve spoken with and worked with, this attempt at cultural connection does little to disturb white social norms, though I am sure it makes Podolner feel good, all while it silences girls and women like Jada Bufford and Jessica Stovall who desire an entirely different classroom and culture, not one that “gives points” for Black cultural knowledge.

Within each episode, you’re likely to smile at fond moments and grimace at missteps, which is the mark of a compelling series. At core though, I hope the series ultimately listens to the Jada and Charles’ who know OPRF will not be different until it becomes a non-White space. The “browning” of OPRF won’t make it a non-White space; critical engagement and challenging everyday practices of white supremacy like: opportunity hoarding, sliding standards, and deficit thinking will. Making our schools, and this country, non-White spaces will take more than seeing Black suffering, it will mean that White advantages must be relinquished and White accountability must emerge. The omission of White students (as main characters) and families worries me that the project could unintentionally reify ideas that when racism impacts life, the onus on repair and restitution lies with the people most affected by racism. I’ll be watching to see where this goes, I hope you will too!