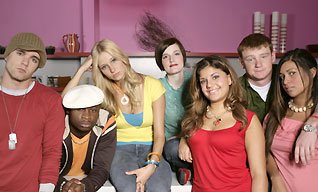 Okay, you must forgive me for posting twice in a row on TV. I had no intention to post on the Real World Austin, honestly it’s a pretty bad show. I watched early episodes and then found more valuable things to do with my time. However, this week I found myself “tuned into the 10 spot.” This week’s episode was divided between two people’s woes: Nehemiah and Wes. This week’s episode starts with Wes receiving a call that Nehemiah is in the county jail. Turns out that Nehemiah got in a fight outside of a local bar. He was placed in jail with a 3000 dollar bond. It’s not abnormal for the Austin Real Worlders to get into fights or get thrown in jail, but apparently Nehemiah’s fight and jailing get the episode’s attention.(Note that Nehemiah gets a lot of attention because episode 22 is named Nehemiah’s actin’ up… bad Negro, bad!). When confronted with the issue of getting Nehemiah out of jail Johanna lamentably repeats that it’s a shame that Nehemiah’s in jail because he’s so poor and he, nor his family has any money! Eventually, Danny negotiates with the Production company to take the bail money out of Nehemiah’s pay check (you did know that they got paid to be on this show, right?).

While Nehemiah sits in jail, Rachel reminds the group that they have a deadline on their documentary and Nehemiah is not there to do the documentary. This entire f***ing season they have been begging/demanding that Nehemiah take the lead (which really means do all the work) on a documentary on a local music festival. So what is the cast to do? Their pet Negro is jailed and they only have a few days before their deadline. The helpless cast sits and attempts to work on the documentary, but they can’t possibly pick all that cotton themselves…oops I mean they can’t possibly complete the editing without him. As they sit in a state of paralysis, Wes notes (paraphrasing) “Well he just spent the night in jail, so he’ll probably want to take a nap and then work on the documentary.” Are you kidding me!?! Danny returns from the jail having bailed Nehemiah out but he doesn’t have his Negro in tow. As the cast watches Danny walk in alone they ask, “Where is Negr…. Nehemiah?” Alas, he won’t be released for another couple of hours.

As Nehemiah returns to the house Wes, clearly part of the moral majority, in a paternal manner asks Nehemiah about what he did and advises him not to hide anything (thanks Dad). Wes then tells Nehemiah how much jail time he could be facing and that he needs to be careful about his actions. Nehemiah is a big boy and goes and apologizes to the White bar owner that he “assaulted” with a big non-threatening sheepish grin on. Lesson learned. If that wasn’t enough, throughout the episode there are interjections of cast members in the confessional explaining how Nehemiah needs to watch himself when he’s drunk and this should be a lesson. After all none of them have been drunk and in altercations, put in jail, or belligerent… not so fast! As Nehemiah returns to his quarters he settles in to work all night, the rest of the house goes out drinking.

Wes comes back drunk and does some “drunken” walking and smashing of the house. He knocks down a closet door, throws a canister of coffee at his housemates, and ends up slapping Rachel a fellow housemate. But of course, he’s “too drunk” to remember any of it. See, Rachel flicked off Nehemiah, and Wes ran to the aid of his Negro. The result is an off camera smack that Rachel forgives Wes for because she’s too tired to deal with it. Alas, the episode draws to a close with Nehemiah having learned his lesson, worked overtime on the documentary, and Wes having slapped a castmate. Thank God their pet Negro learned to behave.

My goodness, that episode was disgusting. If you happen to see it on, watch it! It’s amazing. And I guess it would be good for me to relate this to Michigan, ready…. apparently a future home of the Real World may be Royal Oak. Well maybe while they are in the treelined suburbs they can avoid all those misbehaved Detroiters.