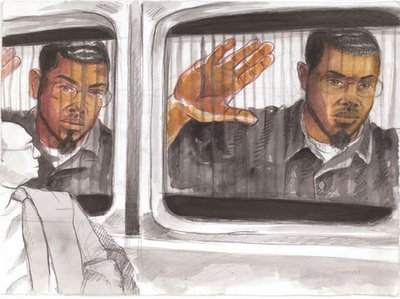 So it’s apparently here, the (print) media blitz over Black men. The Washington Post is now running a series on Black men, I plan to post my thoughts on their series and like most other things, whatever else I darn well please!

The opening piece in the series is based on a poll that the Post conducted. As the title suggests, the results are a really mixed bag. For the past 8 years or so, I’ve found myself consistently uttering the statement, “Being a Black male is all about contradictions.” I often say this statement with a tongue-in-cheek candor to my friends and family, but I, in many ways, do believe this. From my perspective, Black masculinity is a fabulously contradictory constellation. I won’t dive into that, better minds have already done this (1,2,3).
But the survey, at the least, confirms that we see ourselves in complex and in some cases in contradictory ways. As a young Black man I can think of times when I complain about the ways in which women (often White) have changed their posture upon seeing me or outright have run from me because they saw me approaching on a street. But at the same time I recently told my girlfriend that while those types of responses are not ideal, that she should do what she thought made her feel safe (within reason) when she asked about a similar situation. Contradictions. It’s kind of the the same way we don’t flinch when Pac can make “Keep your head up” and “Wonder why they call u b-tch.” To many, this would be a fatal flaw among Black men, but if it is a fatal flaw then we should really struggle to understand where it comes from. In part, it’s got to be attributable to our social position – privileged as men but disadvantaged as Black men in a predominantly White world. But as always, there is more to that story…

Despite our diversity of perspective on our own social conditions and why we are where we are, some things remain pretty central to us.


Despite their clear achievements and general optimism about their prospects, black men worry more than virtually everyone, the survey found.

For a while social science research has been finding evidence that more middle-class African-Americans experience more discrimination, but this still seems to shock many. It really challenges the dominant economic narrative of racial discrimination really being discrimination based on skills or other “unobservables”.


If anything, the survey suggests that better-educated black men experience more direct racism than those with fewer resources. For example, 63 percent of educated, upper-middle-class black men said they have been unfairly stopped by police, compared with 47 percent of less-advantaged black men.

It’s also pretty interesting to see how White men view us… more details are in the survey pdf if you want to check it out, but here is a snippet from the article.


Regarding the obstacles black men face and their prospects for the future, whites were the most optimistic. Black women tended to be the most pessimistic, even more than black men, with only 44 percent of black women saying that now is a good time to be a black man in America . Black women were also just as likely as their male counterparts to see the economic system as biased against black men.

In sum, I am very interested by the poll and will hopefully this weekend plow through the supporting materials in their entirety. Two glaring issues are incarceration and that fact that it was conducted over the phone. With 8 percent of the Black male population imprisoned, there is a considerable perspective that may be missing. And a phone survey likely means that they undersample lower-income people or people with more transient lives. But that’s just the sociologist getting a little nerdy.

Rachel over at Rachel’s Tavern also beat me to posting on this, so I’d suggest you drop by her spot and see what she has to say.

Oh, and should I be ashamed that I cringe each time I see Chuck Brown picture…