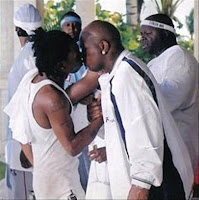 So for the past few years nearly every time I hear Black men nearing a point of emotional intimacy two words quickly have haunted the moment, “no homo.” Picture this Sicily… err, I mean, so picture this, you’ve mentored a brother for the past 5 years, talked him through some major life issues: college, divorce, depression, women, etc. and he’s about to take off for a far off land. He takes a moment to express his thanks for the love that you’ve showed him over the years and how you’ve improved his life and he punctuates his statement with “no homo.” Not only has it happened once, but it’s happened multiple times with the brothas that I’ve worked with. But the reason it urks me so much, is that so many of these brothas are the “good brothas”, the brothas who have attempted to push on issues of gender, inequality at large and sexuality… well maybe not so much the latter.

The “no homo” movement seems to have grown directly out of Hip-Hop’s obsession with hyper-masculinity. As Hip-Hop has pushed the masculine through performance of actions, be they violent or non-violent, the realm of intragender intimacy has consistently been silent. Now of course there are songs for my crew, my niggas, even back in the day my posse, but these songs fall far from carving out a space to discuss close relationships between Black men (except when the subject of the song is dead, then you can talk freely). But this is nothing new to our community, as Black men at large, and those embedded within the Hip-Hop generation.

Now to be clear, I don’t think Black men lack intimacy, I think we simply truncate it for the “sexuality safety.” To me sexuality safety is about the maintenance of an image of heterosexuality (meaning: I’m a guy, I mess with women); and a by extension a vehement rejection of homosexuality (meaning: I’m a guy, I’m not for that gay shit). They are two sides of the same coin in our music. While some are already chomping at the bit to say, not all of Hip-Hop is like this, let me take this moment to pre-emptively strike like GWB and douse some of your righteous indignation and remind you that many of our favorite rappers follow this logic. Nas, Common, Andre 3000, the list goes on. Just search through their catalogs, it’s there!

Hip-Hop’s response has been to dodge or turn a blind eye to homoeroticism, but sometimes it comes full frontal. While rumors about rappers being homosexual have long directed Hip-Hop (check out Marc Lamont Hill’s forthcoming article on more of this). In recent months, rumors have become specters. The Lil’ Wayne and Baby kiss started a firestorm, that I hoped would have lead to a different discussion of male intimacy, but lord knows that fire burned out as quickly as it went ablaze, leaving most people with the same ideas of equating black male intimacy with sexuality. In recent days T-Pain has gained significant attention regarding his comments about Ray J’s sex tape and endowment. After making multiple comments about penis size he attempts to absolve himself of homoerotic overtones by saying “no homo.” See, no harm, no foul. No way in hell. Most folks who read his comments and reacted offered up their own theories of the boundaries of masculinity and appropriate references to another man’s physique. The bottom line that could be taken from most comments that I could stomach was “a real man never even notices another man’s penis”, sure, right.

While the popular attention that Wayne and T-Pain garnered is important, it tells us little about how Black folks, and Black men in particular, understand the boundaries between intimacy and sexuality. I’m most concerned with the use of “no homo” when it comes to interpersonal intimacy. I know that we as Black men have historically bottled emotion, but punctuating our sharing with “no homo” is troubling. By using “no homo” are brothas saying the only men who share emotions are homosexual? Are brothas saying that sharing emotions will immediately lead to some form of sexual encounter? And more importantly, to myself I’ve asked and am asking, do I create an environment with my brothas where they think I’m so anti-gay that they need to qualify their emotions and distinguish them from sexuality?

P.s. Sorry I accidently had the comments turned off on this post, now they’re on!