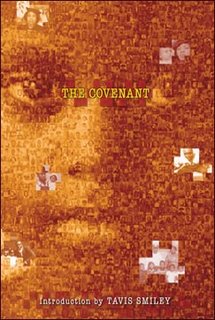 I think we’ve all heard of it, we’ve all had our opinions about it, but I’m not sure we’ve all read it. This weekend I took the time to sit down and read Tavis Smiley’s The Covenant. In fact, let me correct that, I took the time to read The Covenant. Many people that I have discussed the book with have expressed apprehension as well as interest in reading the book entirely based upon Tavis Smiley’s production of it. I would say, neither of these sentiments are actually warranted because the Covenant is a collection of essays and facts compiled by some of today’s leading scholars and activists. Tavis in this sense was a conduit but seems to leave himself out of it pretty well.

For a couple of years I have watched Tavis’ State of the Black Union gatherings on C-Span and my allegiance to them have shifted from year to year. I can’t front, they are really appealing. To me the State of Black America gatherings were like going to church, hearing a great preacher without having to give an offering or being guilted when “the doors of the church are open”. My main critique of Smiley’s gatherings was/is that they featured great speakers but there was a lack of substance that could be drawn from them. The Covenant is supposed to ground the oral acrobats of past gathering and till the soil of an action plan.

I decided to read the Covenant in its entirety after I heard from an old friend of mine who called me and wanted to know my views on the book. Before responding, I swallowed my pride and forthrightly admitted that I had not purchased the book and was considering purchasing it in the near future. In a non-indicting way, he said, “Wow, I figured you already had a copy, had read it, and had started some things around it.” I’m not sure if he invoked my ego or he humbled me, but I realized that I too had transformed into my own worst nightmare, someone who was 80 percent talk and 20 percent walk. So I pulled together my 12 dollars and picked up my copy. Many folks may not know that all proceeds from the purchase of the Covenant go directly to Third World Press. I didn’t realize this until I read Cornel West’s commentary at the close of the book. In this way Tavis ensured that a Black Press received his business, a great action in my view.

My purchase of the book also was interesting, since I was in a rush, I asked the Borders clerk, a white male in his twenties, if he had heard of the Covenant. He said, “Yeah, it’s back here… We have like a million of them.” At that moment I’m not sure if I was glad to know that the book has been so widely distributed (it’s a New York Times Bestseller) or mortified that so many copies had been purchased but no one was buying it anymore. I think I still feel a little of both.

So as I waited in the airport for a trip this Friday I began reading. I was surprised at the lack of hyperbole in the opening of the book. I won’t front, I was expecting a long Westian or Dysonian diatribe on the plight of Black people, you know… “a blues people” or “ because the streets is a shortstop cuz you’re slangin crack rock or you got a wicked jump shot”, but instead I was immediately taken straight to the meat.(On a side note, Dyson is conspicuously absent from the book, while West does sneak in small essay at it’s close.) The book, in my estimation, is a continuation of the lineage that Du Bois sought to establish with the Atlanta Conferences. While many have attempted systematic analyses of the conditions of African-Americans across a broad spectrum, few have successfully conducted these analyses and provided prescription for change that could be understood at the individual, family, community, and policy levels. The Covenant does this. Now of course the book is not perfect, one could desired deeper analysis from some of the contributors, but I ask you to suspend your “academic hat” of deconstruction and “critique for the sake of critique” and take the time to see how each essay fits into the whole. I consider myself decently well read, but the range of the topics covered here, the statistics presented, and the suggestions for change were enough to have me satiated as well as hungry for more insight and actions. The language is accessible, the range is pretty comprehensive, and the diversity in voice is powerful.

This is all done in about 230 pages, this is no small feat!!!! Each covenant (or chapter) opens with an introductory essay on the subject matter. This essay is followed by bulleted facts on the conditions of African-Americans. Next prescriptions of what “the community” can do follow. They are followed by what elected officials can do. Then brief case studies of successful examples of grassroots efforts around these issues are described. Lastly each covenant closes with the endnotes from the essay which provide nice supplementary reading lists. At the end of each covenant, I found myself not only feeling more versed in the topic but also aware that many of us have been successful at affecting our conditions with small actions that yield big results. All in all, I was very impressed with this book. I think this book could provide everyone with some new insight and ideas for social change.