The Death of Civil Rights ??? 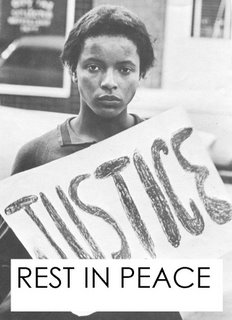 “I’d name Coretta Scott King mayor of the cities and converts feens to Willies…” -Nas- If I ruled the world
Today Coretta Scott King passed away in her sleep. She was of course the wife of MLK Jr, but she also left quite a legacy in her own right.

Unfortunately today also marked the confirmation of Samuel Alito. What a sickening irony. Well, the Supreme Court is full again… here’s to some bleak years ahead.

The Daily also recently reported on STOP BAMN, By Any Legal Means. The article suggests that there may be some affirmative action supporters in this group… yeah, just like the folks who support the “MCRI” support “affirmative action” but not “preferences.” Rhetorical tricks are so interesting. Surely anyone who supports affirmative action and dislikes Bamn will soon find themselves running in the opposite direction of this group. A quick facebook search demonstrates that the group is certainly pro-MCRI with quotes like


The ONLY thing that can stop us from being on the ballot now is a direct order from the Supreme Court, which will never happen.

and links to the “Michigan Civil Rights” site, Zarko’s blog, and an new anonymous anti-bamn blog, you can see the ideological direction. It’s an interesting strategy, they even cite the U-M NAACP’s denouncement of BAMN on their site. Hope too many folks don’t fall for this group’s foolishness.