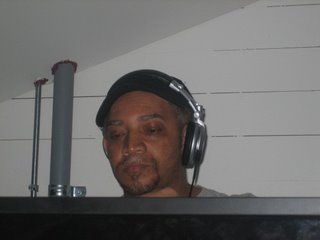 So on Saturday night at about 11:30 I texted my boy with the message, ” U know hip hop has died when I’m at a party in ann arbor headlined by red alert and there are 30 people :( ” At that moment I felt as if I was ready to finally attend the funeral of hip hop. Once as a child I felt this emotion. I grew up craving hearing hip hop on the radio. I remember when my favorite radio station, one of the only ones in New Haven that played hip hop, made the decision to stop playing rap. They started blasting an advertisement that said, WNHC with no rap. Each time I heard the advertisment it was like I felt a stab in my side. As a young child, I had no recourse, but later in my life I did find refugee in NY radio and Kool DJ Red Alert.

I spent the better part of my high school years positioning antennas perfectly to catch Red Alert work the tables and faithfully listening to his trademark high voice and flawless party mixes. So when I heard that the Fokus Cru was bringing him to A2 for a show, I nearly flipped. If you grew up with me in the tri-state, you probably had the dream that Red Alert would descend on your prom, dance, basement party (cause you weren’t in the clubs were he was spinning)and spin the night away. Though I rarely make trips to bars and clubs anymore I felt like it was my responsibility as a head to attend.

I first arrived at the venue around 10:30 with my boy. We walked in and the venue was empty, okay, three patrons were there, but you know what I mean. I felt a small stab in my side, again. We turned around and left, to handle some business and decided to return a little later. When we made it back around 11 there were about 15 people in the venue but this time Popmaster Fable and Red Alert had arrived to the venue. Instead of a stab, this time I felt extreme embaressment. I thought, “Is Red Alert really standing here listening to some fool spin the same song over and over again with an empty venue that he’s supposed to rock?” That’s not Hip Hop!!! Admittedly, if I was the house DJ and Red Alert was in the room I’d be crapping my pants too. But soon the unthinkable happened… DEAD SILENCE. That’s right, there was dead air, the man on the table(s) had let the track run out and there was silence. At that moment me and my boy were chatting with Red and he excused himself to run up to the sound booth. I watched a cardinal sin of Hip Hop be committed in front of a legend. All I could think was, what a way to show Red and Fable what A2 has to offer. Not long after the silence and Red’s return they got the sound situation straight and Fable spun some songs, mainly breaks, that were well mixed and selected.

Unfortunately by this time I was pretty leary that this night would turn up well despite Buff1 and Invincible rocking. The crowd was so thin that they had to personally invite people by name to the dance floor so that they got a proper audience. By the time Red was set to come on, I would estimate the crowd was barely above 30 folks. I texted my boy, to announce the death of hip hop.

Now, don’t get it twisted, I am sure that Hip Hop in some forms is alive and well, but darn it I was aware that MY Hip Hop had died. I made the decision as Red got on the wheels to give all I had to celebrate what Hip Hop meant and means to me. Yeah, I’m dramatic, but you may not understand how much I’ve loved Hip Hop in my life.

On that evening Red Alert grabbed the tables and played a classic set. A few heads laced the floor from the start as he opened the set with classics from the 1990s. It was sonic heaven.

There were three things that stood out in my mind about his set:

Why I think number 1 is important. If you’ve been to a party in the last X years, you know that his playlist was rare. The playlist took us from the early days of art to the “golden era” and beyond, but didn’t litter me with “I’m in love with a Stripper.” It was a college crowd, so I estimate many of the songs predated the audience’s Hip Hop catalog, with some notable exceptions. But he continued to play the tracks and let the music draw people out.

Why I think number 2 is important. I grew up listening to Red on the radio as most of us did, so if you ever made a pause mixtape or couldn’t always sneak those “Parental Advisory” stickers past your parents Red was your gateway to raw/real hip hip without the cussing. Though I didn’t hear many references to my sisters as body parts and animals or my brothers as bucks or brutes, I still liked the set, and so did everyone else who filled the dance floor.

Why I think number 3 is important. The break beat is a lost art in DJing. Now I’m not naive enough to think that many DJs are searching music for breaks any longer and testing them out at parties, but when there is a DJ who does throw on a break during a set, it often means – go refill your drink. Well for the first time in a long time, I saw people dancing hard to breaks as well as songs with lyrics… and that my friends is when I felt Hip Hop had resurrected.

The art of moving the crowd is something that few understand and even fewer master. I am grateful that I got to be in the presence of a master of this art on Saturday. Did the dance floor ever get so packed I couldn’t move? No. Do I think most people know what kind of contribution Red made to Hip Hop and the radio? No. But that’s the beauty of the music and the culture. I’m told before there were Sugarhill Gangs, Clear Channels, and Dreams, there were pure parties and pure Hip Hop. Thank you Red Alert for taking me to a place in the house of Hip Hop that I’d never seen before.