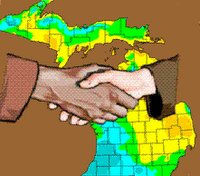 Now if you read this blog, you know I seldom hesitate to mention my preference for Affirmative Action policies and the current struggles with them in US Higher Education. I often skip on posting about some of the things that happen with Aff Axn so that readers don’t suffer from overkill. Well two news articles recently came across my desk that I thought were worthy of mention and/or discussion. The first is an AP story on polling data released on last Thursday about support for the MCRI. The big news is


Forty-seven percent of 600 likely voters surveyed Sunday through Wednesday opposed the Michigan Civil Rights Initiative, which will be on the ballot in the November election. Forty-four percent favored it, while 9 percent were undecided.

The article goes on to acknowledge that essentially the measure is deadlock (never forget the margin of error on polls… especially phone polling). This may mean that MCRI is “losing” steam in Michigan, but the next coming months will be very interesting to see. One United Michigan has continued to step up their efforts on the campaign trail, so I’ll be watchin with baited breath.

Ah and for a little artist contribution coming from the MSU’s Q*News:

The second item is one of NY Times most frequently emailed story entitled, “Colleges Open Minority Aid to All Comers.” The article reveals what many of us know has been happening already.


Facing threats of litigation and pressure from Washington, colleges and universities nationwide are opening to white students hundreds of thousands of dollars in fellowships, scholarships and other programs previously created for minorities.

Since the Supreme Court victories of 2003 there has been consistent pressure from random employees of the Department of Justice as well as the actual Department of Justice to pressure schools and programs to desist from the use of race conscious funding. Southern Illinois University was one such case that was recently “resolved”. As the public in Michigan becomes skeptical about supporting a false Civil Rights amendment, the nation’s office of Justice toils to deconstruct some of the gains that emerged from the Civil Rights Act and Affirmative Action policies. I’m beginning to feel like we’re in a game of three card monte.
***And I know the image is SUPERCHEESE but I had to put it up***