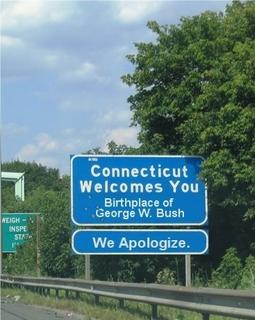 moving through places… just had to bring back the Mos Def real quick. So I’ve been on the road a little bit, so some of this will be Michigan related, and some of it will not be.

My friend recently sent me this picture, it’s a shame that I have to share the same birthplace as that man!

Recently, I went on a nice roadtrip out to NY, but when I got to the mountains of Pennsylvania we were brought to a hault. Normally this happens when travelling back east in the winter due to snow, weather conditions,etc. but this time, there was a house in the road! There were apparently a few pre-fabricated houses that had big issues and slid off the road. Just thought this was weird, if you wanna see click here.

I didn’t get a chance to mention how I liked David Betts’ piece “Authentically American” in Wednesday’s Daily, reminds me of the old Du Bois double consciousness. I have to admit at first I was scared, thought it was gonna end up being a “thank God I’m American and not there” stuff, but I think he did a good job of getting at the tensions of a global identity. If you haven’t checked it, you should check the Souls of Black Folk, saying it’s a classic is an understatement.

On the book tip, the baba of my rites of passage recently released his first fiction novel called They Tell Me of a Home. I’ll start reading it soon, but you should check it. And if you’re reading this, you may or may not know who my baba is, but he is a genius, which is not an overstatement.

Oh, last week looks like Black folks took to the polls, well at least go polled, in a major way. Looks like 2 percent of Black folks support old G.W. Bush. So maybe Kanye was right or it’s the other way around ;)

I would comment on this opinion, but come on, is there really a need? We’ll see how I feel later.