Saunders out, 2 weeks out, Sandals out?

So the big news in the Daily today is apparently Tony Saunders was ousted from the Black Student Union for being a member of Michigamua. This was not news to me, but now he’s appealing his ousting saying that it violates the BSU constitution.

For those who don’t know Michigamua is a “senior honor society” which has a long sorted history of misrepresenting and disrespecting Native folks. Black in 2000 their office space was occupied by a coalition of students of color. Eventually they agreed to not use Native artifacts anymore, etc. Just six years ago, it was common to hear folks of color displeased with Gamua and their practices. Fast forward six years and half the students of color here feel as if the Gamua offenses occurred in another lifetime. We definitely practice selective amnesia at U of M.

Now back to Tony, many folks know and love Tony. Let me make it clear, I really don’t know him from Adam, but I have known he’s been in Gamua since he got tapped last year, so I’m sure we disagree on somethings. Tony is president of the NPHC here and on MSA and was an officer in BSU.

*On a side note, how did you not think he was in Gamua? Black man comes out relative obscurity (participates largely in his frat) then wins a campus wide election with from my point of view little discernible platform… that was red flag number one for me*

In the Daily article it mentions how he refused to go public with his membership when the Daily published a list last year (both him and the Editor in Chief Donn Fresard made this decision, I wonder who else is hiding in woods?) but he said he did it to avoid what he’s going through right now? Okay, let me try to rehash this argument. 1) He joins an organization that has historically and likely con temporarily disrespects students of color. 2) He is serving on a executive board that is meant to be a political arm to the Black community. 3) Instead of resolving this conflict up front, he chose to hide it. Makes sense right?

Since the controversy has come to light, Tony apparently has been receiving threatening phone calls. I don’t think that’s cool.

*Another side note, did you notice the Daily article says it was someone from BSU… has that been confirmed or is that speculation?*

But I definitely think his choice to join a organization that is known to go back on its word and disrespect our community of color was one he has to stand on. His classmate Nicole Stallings came out when the group when public, she suffered her hits, but she’s MSA president and living life pretty well from what I hear.

*Dammit another side note, I wonder is Nicole standing in Solidarity with him?*

While I believe in including folks in our pan-African agenda, I do think lines have to be drawn. I think the decision to not have Tony in a leadership role is a wise one. That’s my two cents. 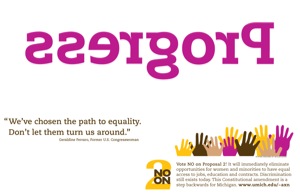 It’s getting cold outside in Michigan. Marc Hill has a hilarious post on sandals and white folks over here. Check out the comment that mentions the theory of ten.