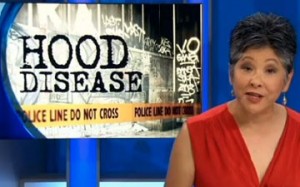 By now, we’re all quite clear that “Hood Disease” is not only not an actual disease, but that it was born of some terribly lazy journalism that relied on a salacious soundbite.

If you missed it, here’s a quick summary: with the words  “Hood Disease” emblazoned next to her head, Wendy Tokuda of the San Francisco Bay area’s CBS affiliate KPIX delivered the following, “Even the Centers for Disease control says that these kids often live in virtual war zones and doctors at Harvard say they actually suffer from a more complex form of PTSD, some call it ‘hood disease.’” The story then began to discuss the set of complex issues that many youth of color in high poverty areas experience daily and some of their consequences on academic engagement.Tokuda’s reporting made it appear as if Harvard scholars coined and were studying “hood disease” which set off a firestorm and multiple questions about research, Harvard, and the sources of the story. A trip to Tokuda’s personal Facebook page reveals that she derived the term “hood disease” from Mark Beasley. Who is Mark Beasley you ask? Beasley is one of Tokuda’s Facebook friends.

The jokes should write themselves here, but this is the sort of propaganda that reinforces dangerous stereotypes about people of color, especially those with economic challenges. Even if you dismiss the ill-fated term,  the report is still framed in a way that makes it seem that the issues that youth in urban high poverty neighborhoods face are actually a disorder that they co-create.

Within the social sciences there is a long history of suggesting that problems among Black and impoverished communities are a function of their own practices and beliefs and divorced from larger social problems. In 1965, the Moynihan Report famously popularized the concept of “tangle of pathology” that argued Black female headed households perpetuated poverty, not lack of access to jobs and economic resources. Later arguments about the “culture of poverty” came to dominate academic and social policy circles resulting in divestments from communities of color and the belief that Black culture was the issue and the role of social structure was minimal, if meaningful at all.

Essentially, Blackness is the disease—or so the narrative goes.